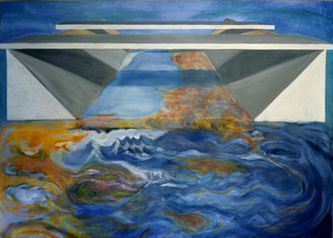 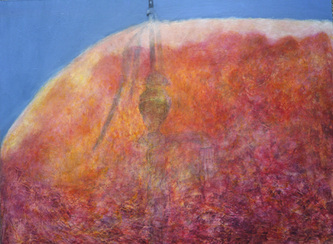 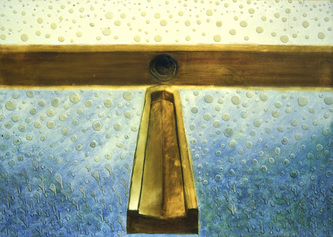 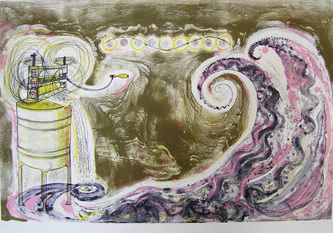 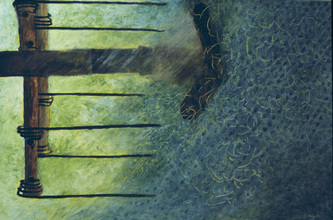 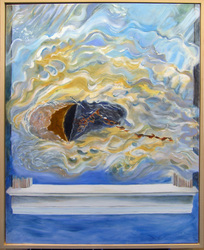 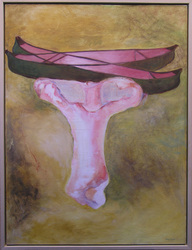 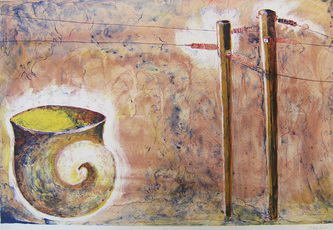 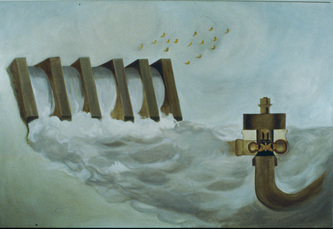 "Equilibrium"
The Currents Series:  On Canadian Water in Several Forms

The forms of Water are physical and psychological. A narrative is suggested involving a  disagreement, maybe a quarrel, between Engineering and Water. The signs of Engineering are simple forms meant to control or manage Water. They are signs of human incursion into the land(scape). The Water has a mind of its own.

Formally they are studies in the surface of the painting, in the tussle between transparency and opacity, between shape and form, in simple sensuous enjoyment of the thinly painted surface and all the ways it can speak.

Water Drainage System Unaffected by Raindrops in the Vicinity

Here are Engineering systems that malfunction because nature chooses to ignore them. Rain refuses to flow through the man-made channels designed for it but arranges itself in large splodges on the surface of the canvas and some of their perfect circular forms deform into running shapes off the lower edge.

A central viewpoint onto the drainage channel produces a coffin-like form, simple and arresting.

The oddity in nature of Water refusing is parallelled by the unusual use of thick oil paint applied with a eyedropper to form mounds that have run a little and then hardened and cratered slightly, like welts.  Against this thickness is the thinness of the paint describing the water system installation.

The hailstorm dumps enormous quantities of fresh and frozen water onto the land, flooding roads, denting cars, wrecking crops, causing an insurance crisis, causing consternation over “nature’s power”.  Meanwhile the icon of farm life, the well, runs dry. Water refuses to flow up through metallic channels engineered for it.

Transparent paint films, built up in many layers, partially obscure the dry well while speaking of the dramatic potential of the summer evening storm. The late Quebec painter, Jean McEwan’s handling of oil paint so that it glows simply from the considered use of pigments, lent me a standard for this. The sky’s blue is the only opaque colour.

Water scientists at the Experimental Lakes Area build a geometrically simple construction to measure water flowing from one lake into another and leave the installation in the landscape. In this instance, the water reacts ferociously but with futility to the engineered structure.

This is an interior landscape of the body and mind that came from a therapeutic dream where the revolving canoe is searching for a place where water lies hidden underneath a dessert of dry sands.  In the act of painting my dream, the shell form came to be an bit player of fleshy humanity in a vulnerable state, missing head, arms, legs. Water is understood to exist deep beneath the sands but cannot be seen because I painted it out, as it strengthened the whole by being absent   A dry spell, thirst and the need to drink and be renewed.

The common forms of a window moulding and a concrete anchor define the poles limiting the gentle lapping of cool clear Canadian Shield Water in a summer lake. It is an essay on psychological escapism, the well known and much-profited-from need to “get away”.  The desire is coming  through the window, and the anchor lapped by water opposes the escapist desire, by heavy holding.